The beginnings of Islamic Education in the U.K. from 1966. 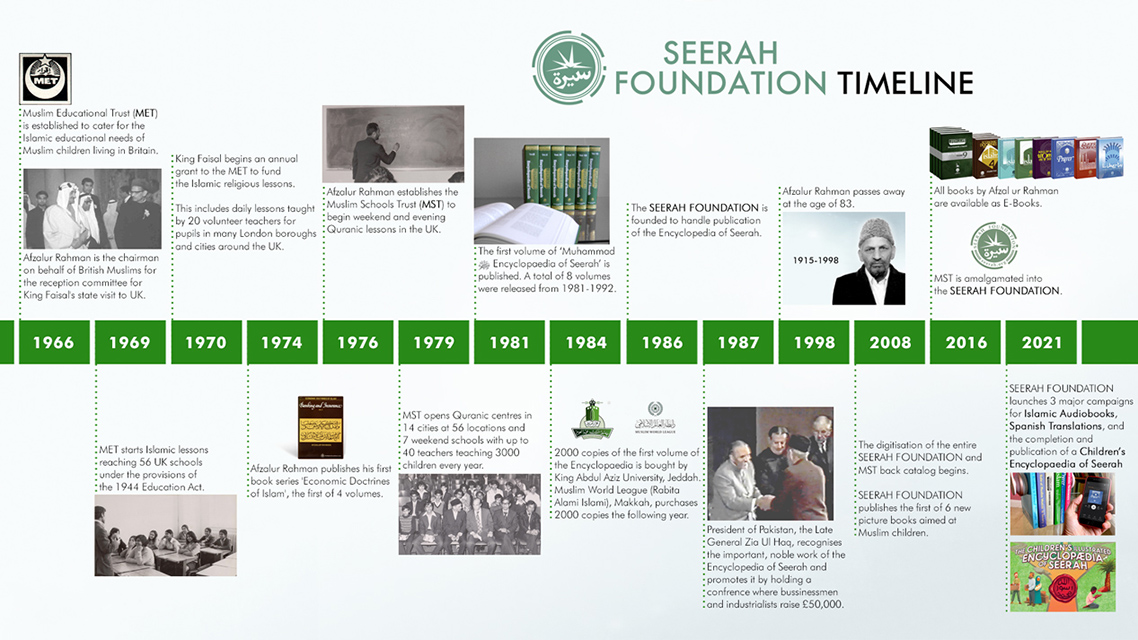 The Muslim Educational Trust (MET) was formed in 1966 by Afzalur Rahman. With funding from King Faisal of Saudi Arabia, who visited London in 1967, the MET began setting up Islamic religious lessons for Muslim pupils, to be held during the time at school that they had Christian based religious lessons. Newham was the first borough to allow the Islamic lessons, along with Hackney, followed by Bradford and other cities outside of London. Approx 20 volunteers tought these classes throughout the 1970's.

Although they began publishing some books, the classes were the main focus of the MET. In 1976 Afzalur Rahman left the MET and formed The Muslim Schools Trust (MST). Although weekend and evening classes recieved funding from the MST, the focus began to shift towards book publishing. This is when Afzalur Rahman, now becoming a prolific author, had the idea of publishing an Encyclopædia, of Seerah.

The Encyclopædia of Seerah

8 volumes of the Encyclopædia were published throughout the 1980's, with the Seerah Foundation being formed to manage this task.

After the publication of the final volume of the Encyclopædia, Afzalur Rahman, now is his 80s, retired fully, and he wrote no new books after the mid-1990's. He passed away in 1998.

Afzalur Rahman's Obituary, published after his death, is available here.

Looking to the future

The Muslim Schools Trust was merged with Seerah Foundation to consolidate the organisation with a new focus. All past publications by the MST and Seerah Foundation are now available as digital downloads. We have plans for new editions of the Encyclopædia's, and also look forward with new books, animations, and other media to spread the message of Islam, being planned in sha Allah.

The early years of The Muslim Educational Trust, The Muslim Schools Trust, and the Seerah Foundation